Gabarus Lighthouse was built in 1890 and it is a focal point of this small remote community located on the southeast shore of Cape Breton in Nova Scotia.

Due to coastal erosion it was dangerously close to toppling into the sea.

In 2015, Gabarus Lighthouse was one of 26 lighthouses to compete in the This Lighthouse Matters crowdfunding competition.

How a small community group garnered the support they needed.

In 2015 Gabarus competed in the National Trust’s This Lighthouse Matters crowdfunding competition which supported Nova Scotia communities who were working to save their lighthouses. But how does a community with 78 permanent residents garner the crowd they need to win the big prize? 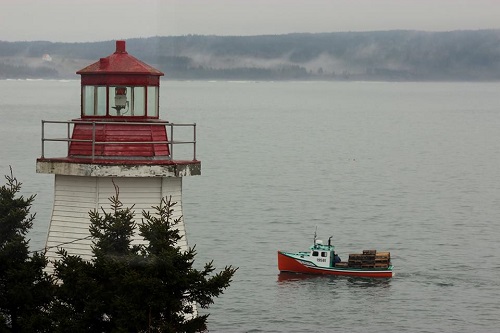 In a small community people don’t communicate with each other via social media. It takes personal contact. So, the Friends of Gabarus Society recruited 10 people who were willing to work throughout the campaign creating a buzz in their community and encouraging people to vote and reach out to family members and friends outside the community.

There are 200 seasonal residents in Gabarus, from Canada, the United States and Europe, but the competition ran before they arrived for the summer. Fortunately, they are very engaged in the community and organizers were able to reach out to them via e-mail with an appeal to spread the word through their social media networks.

Sydney is the nearest major centre 45 km away. So, when Society members made that trip they talked to everyone they could about the campaign. They even attended town council meetings and asked people there to vote and help spread the word.

They reached out to heritage lighthouse organizations around the world asking them to send an appeal to their members to vote and engage their social media networks.

In all of their communications throughout the campaign to their growing list of contacts they focused the message on spreading the word via social media networks. By the end of the campaign they had support from people in Canada, the United States and around the world. They truly harnessed the power of social media.

Gabarus won the 2nd highest prize in the This Lighthouse Matters crowdfunding competition – $50,000.

Gabarus Lighthouse was moved 15 metres inland to safety in November 2015.

The Friends of Gabarus Society expanded their donor base and built a world-wide network of supporters. That support propelled them into the next stage of their project – repairing the lighthouse and incorporating it as part of the plan to boost tourism in the area.

Saving Gabarus Lighthouse was a catalyst for a small community that has banded together to work on several major projects and was awarded the 2016 Nova Scotia Community Spirit Award which goes to a community that promotes citizen engagement, civic pride and a positive outlook on the future. Folks in Gabarus have that in spades!

Think outside your town limits – reach out to people from around the country and the world. It’s not just ex-pats and visitors to your site who may be interested in supporting you. Others around the world may share a passion for your type of heritage site. In the case of Gabarus, there is a world-wide network of people who are dedicated to saving lighthouses.

You may think in a small remote community that you are technology-challenged but there’s always a way to make social media work for you. While social media is a good way to reach distance audiences, in a small community you need personal contact to engage people in your campaign and keep them coming back to vote again and again.

In the heritage sector many of our fundraising campaigns are about raising capital to support the preservation, restoration and regeneration of places that matter in our communities. These are intense and time-limited campaigns that draw on all our resources but enrich our organizations by raising public awareness, increasing capacity to fundraise, and engaging new donors and volunteers.

A donor appeal is a renewal appeal targeted at existing donors and solid prospects. It is often in the form of an annual appeal or an appeal to support a specific project or urgent need.

Crowdfunding is the social media version of fundraising. It’s is a great way to raise funds, but it also raises public awareness, mobilizes communities and expands audiences. Any fundraising project in your community would achieve that, but with crowdfunding, the world is your community.