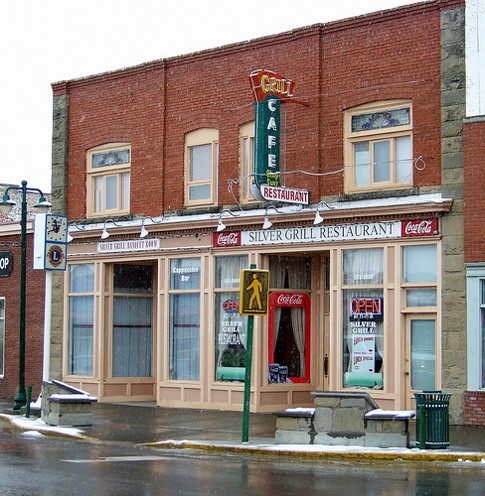 In my ongoing work with the National Trust’s Main Street program, so much of what I do is seeking people out, hearing their stories and helping them understand what Main Street is about. Main Street is about more than buildings: it’s about people. It’s about bringing people out onto the street, connecting them with their neighbours and uniting them behind a common goal. It’s about getting to the heart of a community, finding common ground and building a sense of belonging. When that happens, it’s really inspiring. And it’s rewarding. But it’s not always easy.

My first experience with “Main Street” was in Fort McLeod, Alberta. Hired to work on the Main Street project there (the old Main Street sign I fastened above the office door is still on the building today), a big part of my job was to go out to local business owners and convince them to spend money fixing up their historic buildings. As you might imagine, it wasn’t always an easy sell. Alberta, at the time, was in a recession, so people were naturally more aware of their pocketbooks.

There was one business owner who really was not convinced. He owned a prominent building along the street where he and his family, Chinese immigrants, ran a restaurant that had amazing character and history. We really needed to get him on board. Now, this building was reminiscent of a real western, boom-town saloon. It had a pressed-metal ceiling and an ornate vintage wood bar. Above the counter, there was even this great big mirror with a bullet hole in it. It was an incredible old building, but it was a bit rough—and that’s not including said bullet hole! The inside was filled with stacks of Coke crates and there was peeling paint on the walls. I’d been going back and forth with the business owner, trying to bring him around, but we weren’t getting anywhere. I was running out of ideas, when opportunity and inspiration struck.

A provincial heritage group was coming to town for a day to learn from our Main Street project. As part of the day, there was a reception planned for some three busloads of participants. The tour organizers wanted to go to the trendier new place across town, but I told them I had another idea.

I went to the restaurant owner and said there was this group coming to town and I wanted them to have the reception at his restaurant where they could really experience one of Main Street’s historic places and get to know the people there. His first response was disbelief, but after assuring him this would be a good thing, he agreed.

Over the next few days, there was suddenly a flurry of activity going on at the restaurant. From my storefront office, I watched as men in white painters’ outfits carrying ladders and tools marched by. Finally, the day of the reception came. We walked into the restaurant and I had to do a double-take: the place was transformed. The walls were freshly painted, the Coke crates cleared out and the tables set with white-linen table cloths and vases of violets. The restaurant owner and his family greeted us. They were all dressed in white.

What happened next sticks in my mind to this day. During the reception, we were all swapping stories about the buildings in this town and the people who occupied them and having a great time. Then the owner got up and told his story. He told us how his father had come to Canada to work on the railway, only to be cut off from his family when the government imposed the Chinese head tax. He told us how, after the family was finally reunited, they worked hard to build their business and make better lives for themselves, but faced prejudice and discrimination along the way. You could hear a pin drop in that room. We were all moved to tears.

After the reception was over, and the guests had gone, I went to the owner to pay the cheque. He looked at me and tore it up. He told me he was touched. No one had ever asked to hear his story before. For the first time that afternoon, in that space of sharing, he felt like he belonged. I think it was in that moment that he understood just what we were trying to do with the Main Street program. From that day on, he was completely on board. I too, realized that “Main Street” was about more than bricks and mortar. It was about community.

The restaurant owner fixed up his building and restored its original façade. His restaurant is a fixture on Fort McLeod’s Main Street to this day. And it has become a landmark of my memory as well, as a story I will never forget.

Jim Mountain is a Regeneration Associate with the National Trust for Canada. He’s worked on more than 50 Main Street projects and heard thousands of stories in communities throughout Canada.

Everyone loves a story – and heritage places have stories to tell. The story of your heritage place is a crucial piece of your fundraising plan. It will carry over to all your materials [flyers, website, e-mails, and donor appeals]. Telling it in a compelling, emotional, engaging and inspiring way will win you donors.

Drawing on the lessons learned from success stories from across the country, here are some of the key activities that can help you regenerate your downtown.

Canada’s communities are made up of historic places that define our national identity and give shape and texture to our urban and rural neighbourhoods. Their social, historic, and environmental value goes well beyond the economic value they hold for their current owners.

Did you know you can enjoy a library of on-demand webinars and conference sessions available to you as a National Trust member?